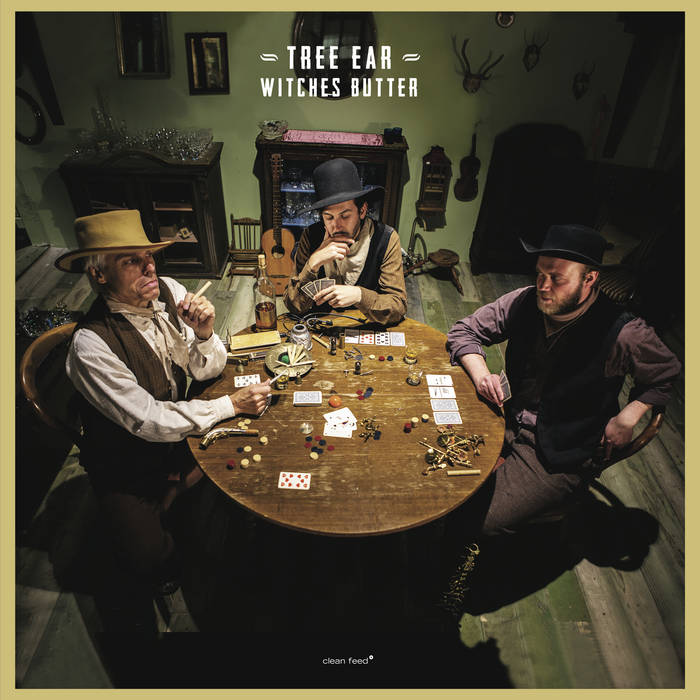 Tree Ear offers the international community an inspired crystallization and synthesis of their musical thinking in the powerful debut CD/LP "Witches Butter”. As the cover and the titles reveal the stakes and the willingness to take risks are high and consequently the results for us to hear are compelling and breathtaking. Hemingway, Troller and Strinning recognize the value and importance of being fluent in non-idiomatic as well as idiomatic musical vocabularies, all of which play a role in the content of what you hear presented in this exciting new release.

Hemingway is familiar to many Clean Feed listeners from his prolific manifestations as a composer, percussionist and improvisor. He is restless in his desire to explore new territories of artistic creation and with that continually forging new relations in his expanding artistic community. He as well believes in and maintains long and rich musical relationships over many years such as BassDrumBone which celebrates it’s 40th anniversary in 2017.

Strinning is a richly influenced synthesis of many musical inquiries - he continually finds new possibilities in current and sometimes long standing musical traditions. The composite richness of his musical offering can be heard in his solo recording “Kerrin" on Wide Ear records. He inevitably communicates through his reed work, his deep passion and fluency in the multi-faceted traditions of jazz via collaborations with Fredrik Longkvist, Hans Koch and Urs Leimgruber. Troller is a remarkably versatile and singular guitarist with profound skills as an improvisor, sound artist, and with huge ears that can deftly master the split second negotiations of instantaneous collective interplay and invention. He is currently most known for his part of the uncomprimising jazzcore band Schnellertollermeier, which is often characterized by the way psychedelic harmonies are crossed with incisively executed punk noise.

Hemingway, Troller and Strinning put their bet on the table that this recording offers the possibility for the future of music. Are you in?

Bandcamp Daily  your guide to the world of Bandcamp